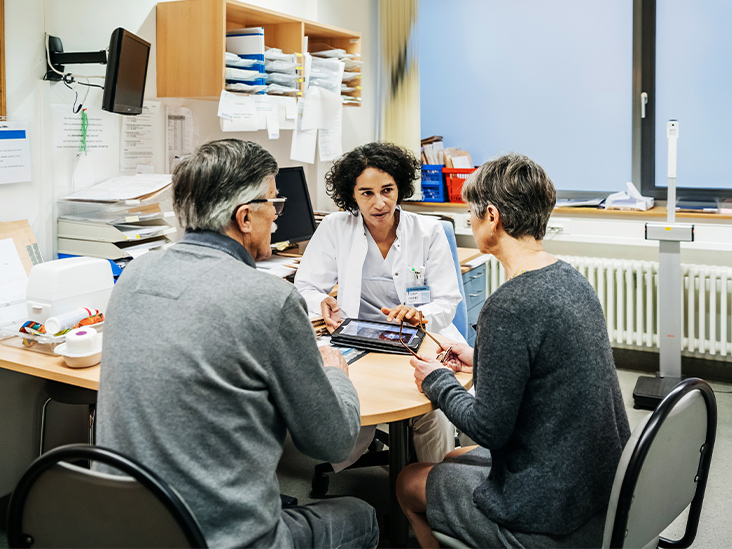 ‘You’re Getting Older’: How Seniors Can Counter Ageism From Medical Professionals

Experts say ageism in the medical industry is growing. They urge older adults to prepare for their appointments and bring along an advocate.

It took 4 months, 3 biopsies, and a whole lot of cajoling for Leah Wooten of Louisiana to get a diagnosis of pancreatic cancer for her husband, Tom.

Wooten, an experienced nurse, blames their ages. While they were both, at the time, only in their 60s, Wooten said she felt the medical teams they met with took their reported symptoms less seriously.

“It always seems like, the older you get, the less they listen to you,” Wooten told Healthline.

Could a faster diagnosis have helped her husband live longer than the year and a half he did after that diagnosis?

Wooten will never know. But she’s sure of one thing: Ageism played a role in those 4 months, something she looks back on and sees as “torture.”

“We’d been together so long, I just knew something was not right,” she said.

Now a widow, Wooten is angry at that treatment and wants other older adults to be sure to advocate and push as she did.

She’s not alone. With society living longer – and more seniors facing medical issues – reports of what people see as ageism are growing.

Four years ago, Cissel felt sluggish and gained weight she could not shed. She was a long-time exerciser who knows her body, but she was told by doctors that her worries about a medical reason were unfounded.

Something, she told them, was wrong.

Cissel searched until she found a doctor who would listen. Thyroid surgery fixed her condition.

But she wonders now: What if she’d not pushed? And how could those other medical experts have pushed off her worries so readily?

“[They] allowed me to go through torture,” Cissel told Healthline. “If I was a younger woman, would [they] have done that?

So what’s an older adult to do?

For starters, know that your concerns are real, Wooten said, because people will toss doubt at you.

In fact, a World Health Organization reportTrusted Source published this year stated that ageism is now more prevalent than ever.

In it, researchers said that 1 in every 2 people globally are thought to have negative ageist attitudes.

Colm Diver, MS, a registered dietitian with Plato Physio, works with seniors (and others) to help them navigate such issues.

“Negative attitudes toward older adults can reduce their functional and mental health as well as their recovery from illness,” Diver told Healthline.

In addition, he added, it could lead to an increased risk of death. A 2019 systematic reviewTrusted Source, he noted,
found that 95 percent of 422 studies investigated predicted a decrease in health conditions due to ageism.

Experts have a number of suggestions for older adults when they visit medical professionals. Here are some of them.

Be ready for your appointments. It’s a smart idea, experts say, to make a list of what you need your medical professional to hear. Pull it out and check each thing off and do not let any of them be pushed aside.

Lists keep a person focused and help anyone - at any age - not get distracted from the goals of the appointment.

Should a medical expert push off any of your listed concerns or downplay them, be strong and determined.

Brenda Avadian, MA, who speaks internationally about caregiver rights and tips and operates The Caregivers Voice, said the way to respond if your concerns are pushed aside is simple.

“I would pause and look the doctor in the eye and ask him to explain it so I can take an active role in my healthcare,” Avadian told Healthline. “I’m serious about this.”

*Bring an advocate: At any age, it helps to have another set of ears in the room when something medical – particularly something worrisome – is being addressed.

For seniors, it is even more vital.

“A medical healthcare advocate can save your life, your money, your time, and your health,” Jean Llamas, president and owner of Care Navigators Inc., told Healthline.

Llamas, who has decades of nursing experience and works mostly with people with dementia, said she’s seen countless times when a medical team suggested that someone have a “do not resuscitate” order only to see that person – thanks to an advocate – live for years longer.

As soon as you are in your 50s or 60s and have a few medical diagnoses, Llamas said, you should meet with a medical advocate.

You can find them, she said, under such titles as “geriatric care manager,” “aging life care professional,” and “healthcare advocate.”

“Find (an advocate team) who hires nurses,” she said “They know medicine, can walk in, and read a chart and understand it.”

Even advocates may need to fight

Maggie Fears, PhD, is a medical researcher who understands the field overall.

She went with her mother for a medical appointment and ended up fighting for what her mother needed.

Weeks later, when she moved her mother to a new home, she asked for the charts from her mother’s medical team, only to find a note in it that read:

“Patient is non-compliant. Daughter is argumentative.”

“Had I not read that,” Fears told Healthline, “judgment would have been made on us.”

That, she said, has led her to worry about the appointments she cannot make with her mother.

“It’s got to be so hard (at an older age),” she said. “I’m a woman in my middle 40s with a PhD in biomedical sciences, and they talked down to me. If mom had been alone at those appointments? Who knows what the outcome would have been.”

In the end, she said, the best advice may be trusting your gut and not assuming every medical person is always right.

“There are some care providers who think so highly of themselves, no one else has a valid opinion,” she said. “Best to avoid them.”