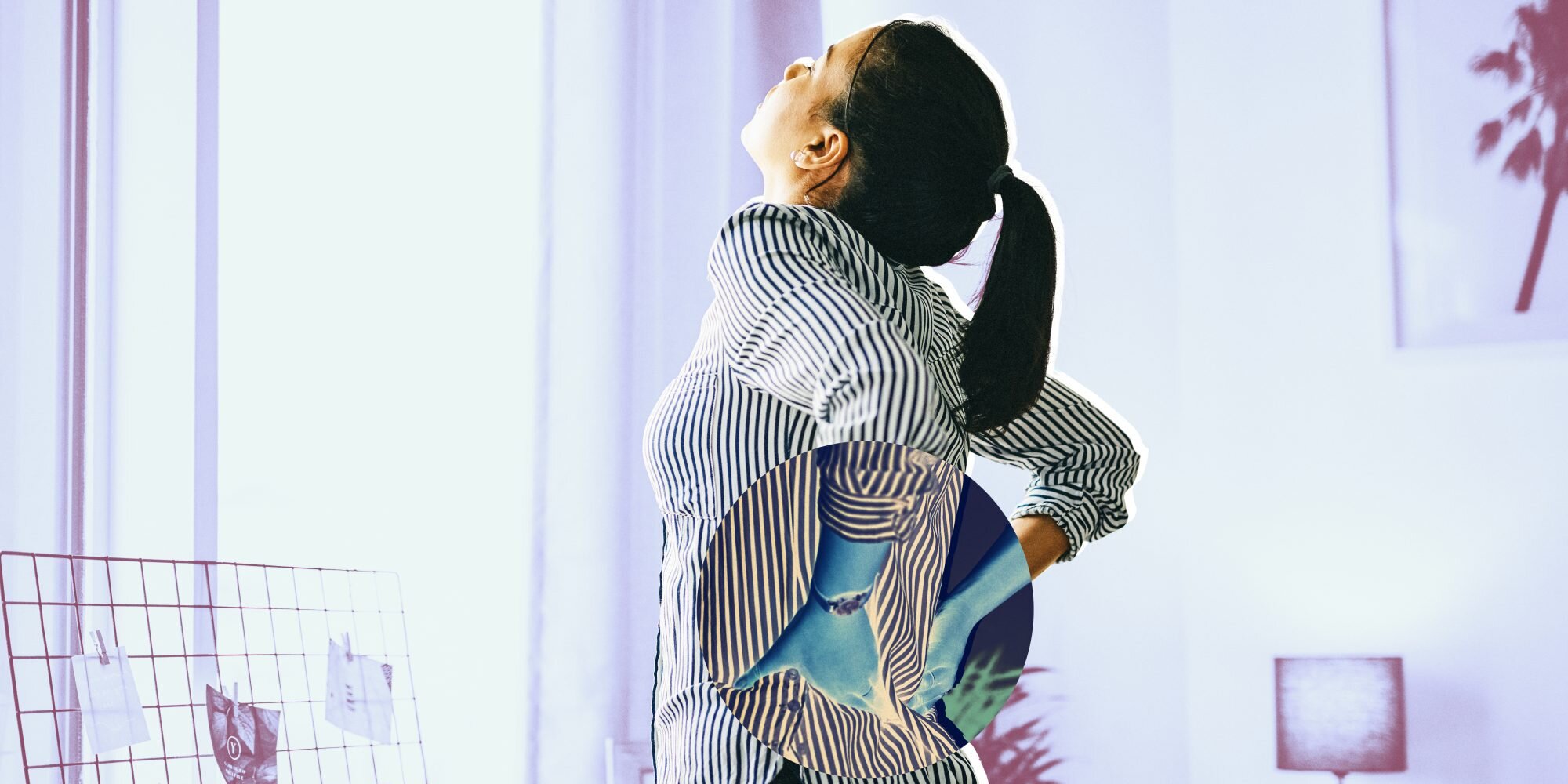 What Is Ankylosing Spondylitis? Doctors Explain This Type of Arthritis

The condition can often look like run-of-the-mill back pain-but it shouldn't be ignored.

Up to 70% of adults around the world will suffer from back pain at some point in their lives, according to the World Health Organization. And while it's easy to brush off that constant ache in your posterior as just part of getting older, there could be a more serious explanation behind your pains.

Ankylosing spondylitis (AS) is a type of inflammatory arthritis which primarily affects your spine-and leads to the all-too-common symptom of back pain. It's important not to ignore symptoms of AS, since leaving the disease untreated could lead to more serious disability over time.

"Early diagnosis is important," says Magdalena Perez-Rivera, MD, rheumatology specialist with Conviva Care Centers. "The earlier you treat AS the better the outcome and your quality of life, [plus you will have] less complications and less limitation in range of motion."

Since some of the symptoms of AS mimic other more common back pain conditions, it can be hard to know what calls for a visit to the doctor and what can be solved with some simple at-home remedies. Here's how to tell AS apart from other conditions and what you can do to manage it.

What is ankylosing spondylitis?

First, let's split apart those two big words: ankylosing means stiffness or fusion in a bone or joint, while spondylitis means inflammation of the spine. Put together, this condition is one where the vertebrae of your spine become inflamed, according to the National Institute of Arthritis and Musculoskeletal and Skin Diseases (NIAMS). As the disease progresses, this can cause some of those vertebrae to fuse together, inhibiting your overall mobility.

What are the symptoms of ankylosing spondylitis?

Although AS can be tough to diagnose because of how similar it is to other conditions that cause back pain, there is one primary difference: where most back pain improves with rest, that's not the case for AS.

"The most common and discussed symptom of AS is inflammatory back pain that is worse in the morning, gets better with exercise, [and shows] no benefit with rest," Elena Schiopu, MD, a rheumatologist at the University of Michigan Health, tells Health.

If you've been treating your lower back pain with the usual approaches (think: heat and rest) but you're not getting any relief, that's one sign that you could be dealing with AS. Dr. Schiopu also notes that your pain could initially be intermittent and located only on one side of your lower back, but may increase in persistence over time and spread to both sides.

Some other common symptoms of AS, according to the NIAMS include:

What are the causes or risk factors of ankylosing spondylitis?

Just like all other forms of inflammatory arthritis, there's no known cause of AS—but there is a genetic component to the disease, as well as environmental factors that can contribute.

According to Dr. Schiopu and the Arthritis Foundation, a gene called HLA-B27 may put people at a greater risk of developing AS. The disease is also more common in men, and it's frequently diagnosed in young adulthood—earlier than age 45, according to the NIAMS.

The NIAMS also says that those with other inflammatory conditions like Crohn's disease, ulcerative colitis, and psoriasis may also be more likely to develop the disease.

How is ankylosing spondylitis diagnosed?

Getting an AS diagnosis is necessary but also tricky. There is no single test available for AS, per the NIAMS, and telling your doctor you have "back pain" is a vague descriptor that leads to early AS often being misdiagnosed or dismissed as injury.

"Back pain is one of the most common patient complaints, so the diagnosis could be easily missed," stresses Dr. Schiopu. "It's important to obtain a thorough [medical] history, radiographs of the pelvis, and blood work."

Since most people with AS have the HLA-B27 gene, blood work can be a valuable tool in diagnosis if your doctor suspects you may have the condition, and blood tests can also show markers that inform your doctor of high levels of inflammation.

Imaging tests are also helpful, though with some caveats-Dr. Perez-Rivera says X-rays are usually the first step, but that they won't be helpful unless you've been uncomfortable or experiencing symptoms for more than a year. In those cases, an MRI is more useful.

"A no-contrast MRI will show early findings because you can see inflammation of ligaments, tendons, and muscles [as well as erosion of the spine]," she explains.

How is ankylosing spondylitis treated?

Managing AS usually requires the use of several medications and therapies. Non-steroidal anti-inflammatory drugs are usually the first step for inflammatory arthritis conditions, according to the Arthritis Foundation; these include ibuprofen and naproxen. Your doctor may also prescribe a corticosteroid to reduce inflammation.

If those don't help, Dr. Schiopu says a disease-modifying anti-rheumatic drug (DMARD) called sulfasalazine, along with aggressive spine exercises, may help you preserve some mobility and function. From there, someone with AS may move on to a biologic drug such as tumor necrosis factor-alpha (TNF-alpha) inhibitors and interleukin-17 inhibitors.

None of these interventions have been proven to halt AS disease progression completely, notes Dr. Schiopu, but they can go a long way toward improving your quality of life.

You may also want to supplement any pharmaceutical treatments with doctor-approved exercise and physical therapy, per the NIAMS. These efforts can help relieve some of your symptoms by strengthening your joints, reducing inflammation, and increasing your flexibility and range of motion.