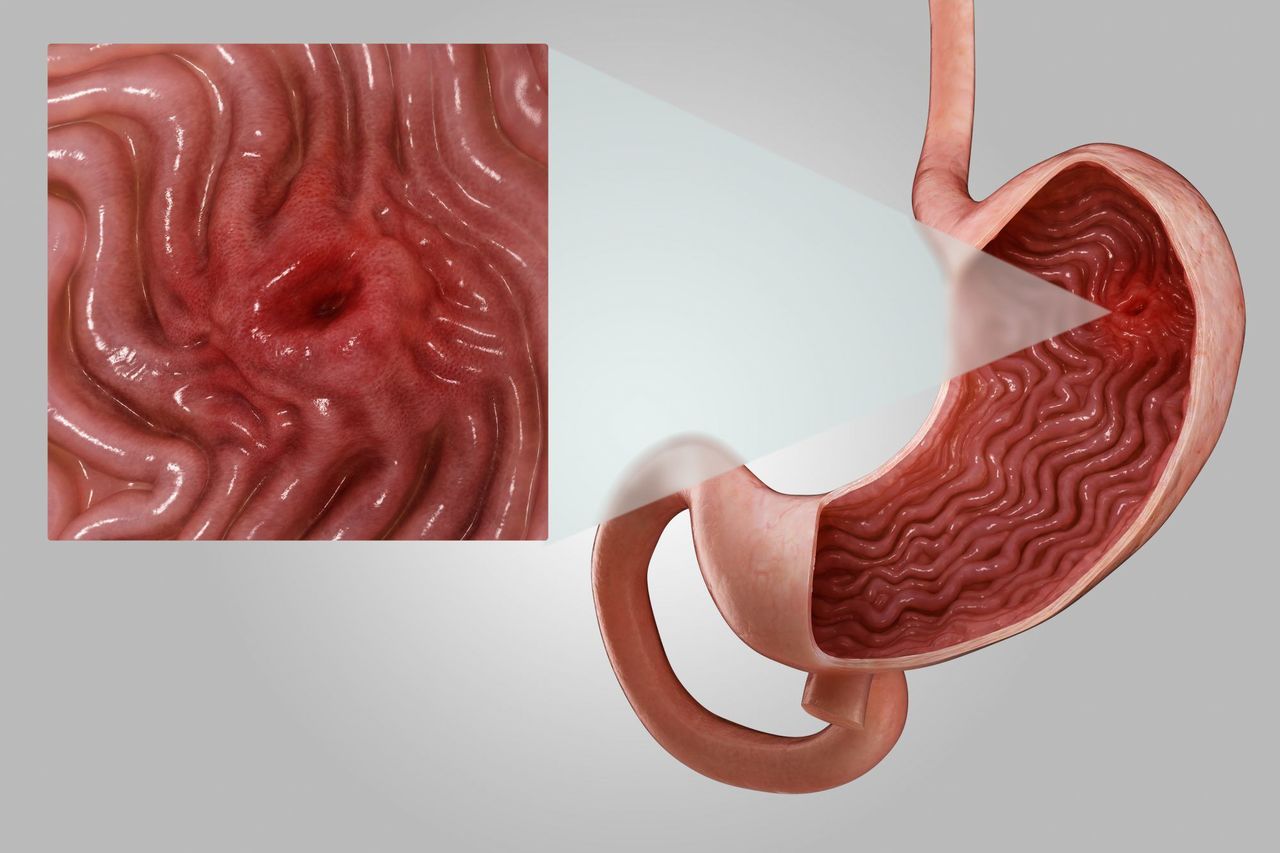 What Is a Stomach Ulcer? Here's What You Need to Know About Symptoms and Treatment

Most important: Is it really caused by stress?

We've all said it at some point: "I think I have an ulcer."

Typically, that's after a few days of suffering from stomach pain, something that's not necessarily nausea, but feels off. Stress-which can definitely lead to a host of health issues-is often to blame...but is it, really?

To get to the bottom of what ulcers actually are, Health talked to a gastroenterologist to find out more about ulcers, what causes them, and what you can do to feel better ASAP.

What exactly are stomach ulcers-and how do you get one?

“An ulcer is a break in the lining of the stomach,” David Greenwald, MD, a professor of medicine and gastroenterology at Icahn School of Medicine at Mount Sinai in New York tells Health. The best way to imagine this, he says, is to picture the lining of your stomach as the inside of your cheek-pink and moist. An ulcer is a crack or sore in that lining.

These stomach ulcers-also called peptic ulcers-happen when the acids that help you digest food damage the lining of your stomach or duodenum (part of your small intestine), according to the US National Library of Medicine (USNLM). That acid erosion is caused by a few different things, but 90% of all stomach ulcers can be boiled down to two causes: An infection of the bacteria Helicobacter pylori (H. pylori) and anti-inflammatory drugs like aspirin and ibuprofen.

People describe stomach ulcers in various ways, explains Dr. Greenwald. In general, though, they feel “some sort of discomfort in the upper part of the abdomen.” This can be verbalized as “pain” or a “gnawing feeling all the time.” Dr. Greenwald says people explain it as ongoing nausea, too.

How are stomach ulcers diagnosed and treated?

“A lot of the diagnosis initially rests on a good history: A physician listening to a patient and looking for typical symptoms,” says Dr. Greenwald. He adds, “Ulcers are made worse with more of the offending agent.” In other words, if a patient experienced symptoms every time they took aspirin, for instance, that could signal to their doctor that they were suffering from a stomach ulcer.

Additionally, what reprieves a patient’s symptoms might clue doctors in to what’s going on with the patient. “Sometimes certain foods can make things better. Some people find milk can make ulcer pains better,” says Dr. Greenwald. In some cases, an endoscopy might be used to diagnose a stomach ulcer.

As far as treatment goes, antacids are what doctors prescribe to relieve stomach ulcer symptoms. These are medications that can either be liquid or tablet form that neutralize the acid in one’s stomach. If the ulcer is caused by a bacterial infection, antibiotics might be used to treat that infection, says Dr. Greenwald.

While the fix might be relatively simple, stomach ulcers can cause serious complications. “The two most serious would be bleeding [and] perforation, a hole in the stomach. That can lead to emergency surgery,” says Dr. Greenwald. For this reason, if you suspect you might be experiencing stomach ulcer symptoms, it’s important to get to your doctor ASAP.