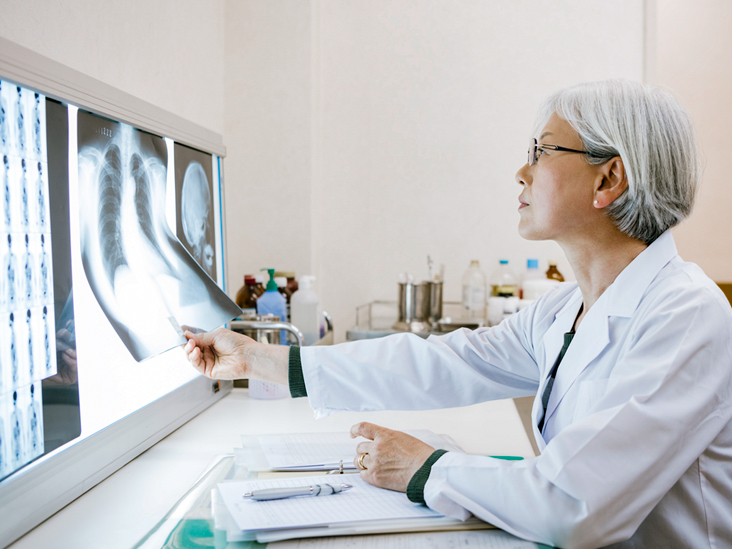 Lung cancer is a serious diagnosis but research is helping to find new treatments. Learn how lung cancer appears in X-rays, CT scans, and biopsies.

Though a lung cancer diagnosis is serious, new and increasingly effective treatments are being researched every day. Early diagnosis and treatment may lead to a positive outlook.

Though lung cancer is common and can feel scary, the number of new lung cancer cases is decreasing, most likely due to positive lifestyle changesTrusted Source in the population and new treatments.

Here are some pictures to illustrate what lung cancer looks like.

There are also two less common types of NSCLC:

Only about 10 to 15 percentTrusted Source of all lung cancers are SCLC. This type can spread quickly and is often more challenging to diagnose early.

SCLC often responds well to chemotherapy and radiation, though it may often recur after treatment.

Other types of tumors can also occur in the lungs. Called carcinoids, these tumors grow slower than other types of lung cancer.

Carcinoids don’t usually spread to other areas of the body. They aren’t caused by smoking.

Several tests will allow your doctor to make a lung cancer diagnosis:

If you have any symptoms of lung cancer, your doctor may order a chest X-ray. A chest X-ray of someone with lung cancer may show a visible mass or nodule.

This mass will look like a white spot on your lungs, while the lung itself will appear black. However, an X-ray may not be able to detect small or early stage cancers.

A computed tomography (CT) scan is often ordered if there is something abnormal on the chest X-ray. A CT scan takes a cross-sectional and a more detailed image of the lung. It can give more information about abnormalities, nodules, or lesions - small, abnormal areas in the lungs seen on X-ray.

A CT scan can detect smaller lesions not visible on a chest X-ray. Cancerous lesions can often be distinguished from benign lesions on chest CT scans.

Your doctor cannot diagnose cancer with only an image from a CT scan or an X-ray. If they are concerned about the results of image tests, they will order a tissue biopsy.

If you can produce phlegm when you cough, microscopic cancer cells may be seen in this form of screening.

In a biopsy, your physician will take a tissue sample from your lungs for examination.

This sample may be removed via a tube placed down your throat (bronchoscopy), an incision at the base of the neck (mediastinoscopy), or by making an incision in the chest wall and using a needle to collect the sample.

Lung cancer is one of the most common types of cancers and may require quick and aggressive treatment. Some major milestones have been reached in clinical research to find more effective methods of treating it.

If you’re worried about the risk of lung cancer, speak with your doctor about screening and prevention. They can help you determine what steps to take to treat or prevent lung cancer and any related conditions.