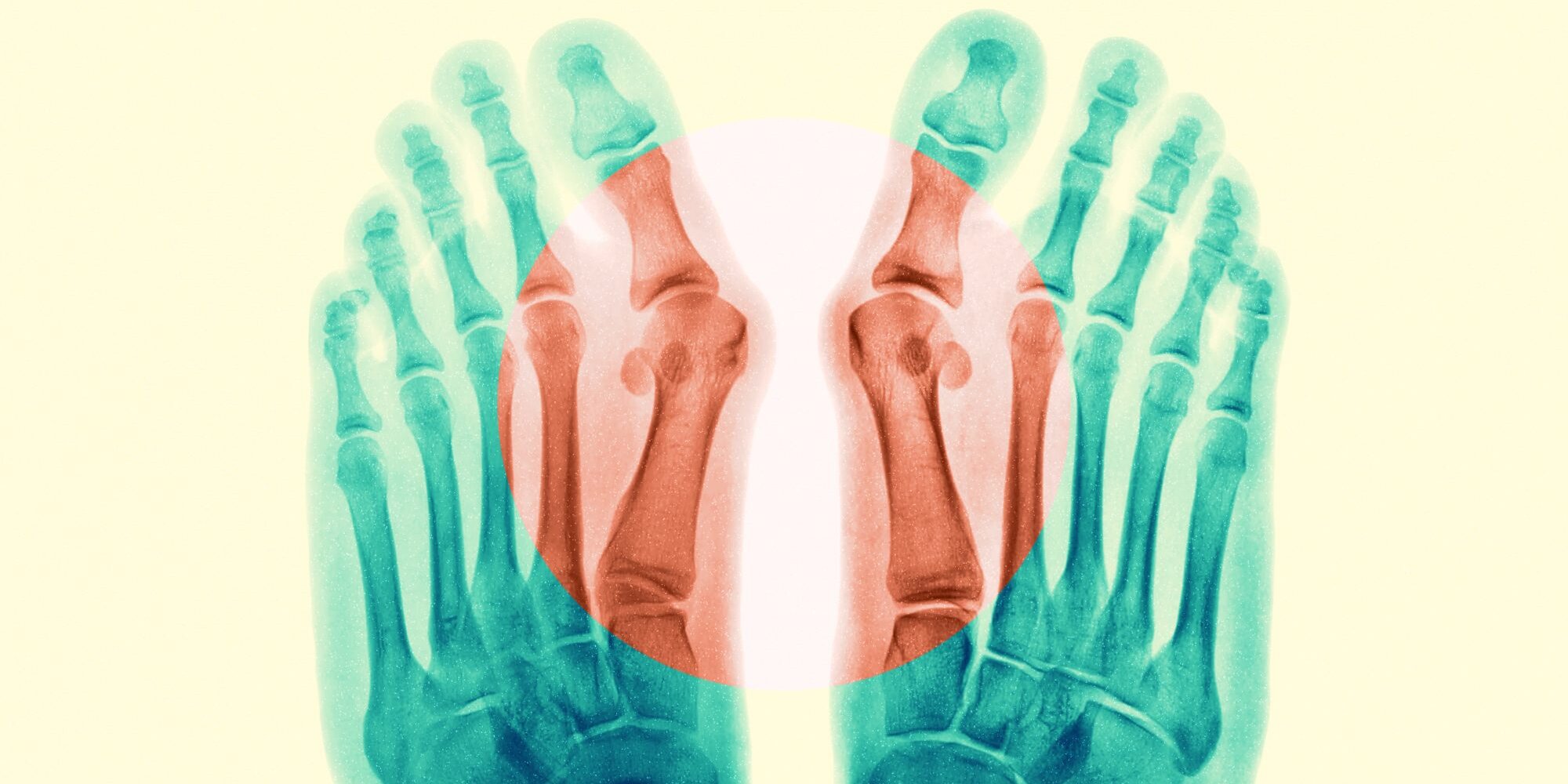 What Causes Bunions? What to Know About This Painful Condition

It might be time to start reconsidering your shoe choices.

Your feet take on a lot of punishment for very little reward: You pound the pavement with them during runs; stub your toes on furniture corners, wear uncomfortable shoes on the regular-it only makes sense that eventually they may develop some sort of issue.

Bunions are one of those foot problems that many people deal with—the painful bumps can make wearing regular shoes a hassle, and, in extreme cases, make walking or exercising very difficult or painful.

About one in five people will develop a bunion (or bunions) in their lifetime, Jeffrey R. DeSantis, DPM, President of the American Podiatric Medical Association (APMA), tells Health—and because they're so common, it's important to know the signs to look out for, and what your options are if you suspect you have developed a bunion. Here's what to know.

What exactly are bunions?

A bunion-sometimes referred to as hallux valgus-forms when your big toe starts pointing toward the second toe, according to the US National Library of Medicine's MedlinePlus resource. This results in the formation of a bump on the outside of your big toe.
But that bump isn't your average bump-it's actually a deformity of the metatarsophalangeal (MTP) joint. When your big toe shifts, that MTP joint is moved out of alignment, and it starts to protrude and becomes inflamed, according to the American Academy of Orthopedic Surgeons (AAOS).

Bunions normally start out small, but get worse over time per the AAOS. That's because with every step you take, the affected MPT joint flexes-and each time that joint is irritated, the bunion grows bigger and gets more painful or difficult to walk on.

Doctors don't know everything they'd like to about why bunions are formed, John Kennedy, MD, an orthopedic surgeon at NYU Langone, tells Health. "Many theories have been proposed for the cause of bunions and no single case exists," Dr. Kennedy says.

That said, the AAOS lists a few potential risk factors that could lead to the development of bunions.

Bunions are also more likely to affect people who typically wear tighter, more narrow shoes. According to Harvard Health, those who work in jobs that require a lot of time on your feet (think: teachers and nurses) can have an increased risk of developing a bunion, as can ballet dancers who regularly put their feet through a lot of trauma and stress.

What are the symptoms of bunions?

While bunions can occur at any age, they're likely to become more irritating later in life, Dr. Kennedy says: "As we get older, the symptoms of bunions become more pronounced."

Symptoms of bunions, per the AAOS, include:

How are bunions diagnosed and treated?

If your doctor suspects you're suffering from a bunion, they'll likely ask you questions about your medical history and examine your foot. They might also order an X-ray to confirm the diagnosis, per the AAOS.

Once diagnosed, your doctor might suggest a few non-surgical bunion treatments, such as changing your footwear. "In the vast majority of cases, bunion pain can be managed successfully by switching to shoes that fit properly and do not compress the toes," per the AAOS, which adds that placing "bunion-shield" protective pads over the bump might also help. Additionally, icing your bunion or taking non-steroidal anti-inflammatory medications (NSAIDs), such as ibuprofen, might also help.

If your pain increases, your doctor might recommend surgery to remove the bunion, or a bunionectomy. According to MedlinePlus, a bunionectomy involves a surgeon realigning the big toe, and removing the bony bump. Dr. DeSantis says he usually only recommends the procedure after a patient has tried non-surgical treatments and they didn't work.

The good news is that most patients who opt for a bunionectomy don't even have to wear a cast afterwards, Dr. DeSantis says, adding that the recovery time isn't all that bad and normally includes one month in a boot, one month spent in tennis shoes, then up and walking normally again within 90 days.

Can you prevent bunions?

Wearing properly-fitting shoes that don't compress your toes might be useful in preventing bunions, per MedlinePlus. But it's crucial to check in with a qualified specialist as soon as you think you might have a bunion, Dr. DeSantis says, explaining that it's easier to treat a bunion if caught early on. "The biggest thing I see in private practice: Patients will wait because they're afraid, [but] early treatment is better," he says, explaining that seeing your doctor sooner could mean the difference between surgery or less-invasive treatment options.