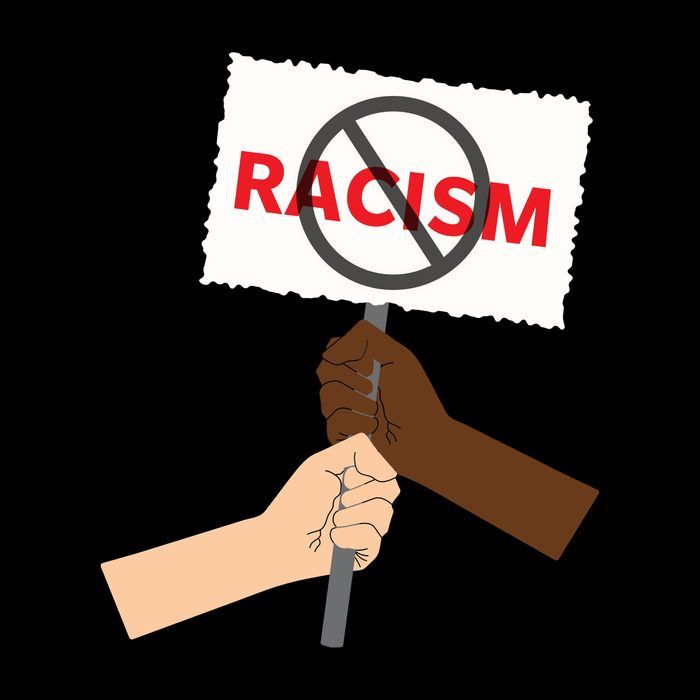 It's not enough to get mad about racial inequality. You have to do something about it, and that’s where anti-racism comes in.

If North America is ever to become a beacon of true racial equality, it will take a villageขand a revolution—to get there. That means white people will need to do more than simply not be racist. To be true allies, they need to be anti-racist and fight alongside communities of colour to make a difference. When we think of “anti,” we tend to think of something that’s negative, but being anti-racist is the most positive and effective thing a white person can do in the slow march toward social justice. The first step is to unpack the concept of anti-racism by exploring its meaning and goals. You can also expand your knowledge by reading some powerful quotes and books about racism, support Black-owned businesses, and maybe even make a Black Lives Matter donation. There really is no wrong way to go about it. You just need to start somewhere.

The difference between being non-racist and being anti-racist is like the difference between burning calories while you sleep and burning them at the gym. Non-racist is strictly an adjective, and it suggests a sort of inert neutralityขbeing without doing. Anti-racism, meanwhile, is a noun that functions like a verb. It’s not passive; it’s active. The National League of Cities, a U.S.-wide advocacy group for city leaders, defines anti-racism as “a system in which we create policies, practices, and procedures to promote racial equity.” It encompasses a code of conduct that requires more effort than outrage. It demands action and a conscious effort to try to change the world.

The history of anti-racism

The concept of anti-racism goes back to the slavery era when white abolitionists were fighting for freedom on behalf of Black slaves and freed Blacks were fighting for both emancipation and equality. They were America’s first anti-racists. White abolitionists like William Lloyd Garrison and Uncle Tom’s Cabin author Harriet Beecher Stowe and Black intellectual leaders like Frederick Douglass and W.E.B. Du Bois led the way in the 19th and early 20th centuries, though change was sluggish. Anti-racism gained momentum in the mid-20th century with the civil rights movement, culminating in the Civil Rights Act of 1964 and the rise of Black Power in the late ’60s and early ’70s. Later, with the founding of Black Lives Matter in 2013, anti-racism once again became a powerful force of reckoning. Although white Americans have been an important part of anti-racism, it was the resurgence of BLM after the murder of George Floyd in 2020 that further catapulted white involvement to unprecedented levels.

“The video of George Floyd being kneed to death by Derek Chauvin and [Chauvin] just casually looking into the camera took people back,” says writer and activist Kevin Powell, who was a part of reality TV’s first in-depth discussions about race during the first season of MTV’s The Real World in 1992. “This must be what it looked like and felt like when you saw white people standing around a Black body dangling from a tree. It was a reckoning and realizing for the first time that the America they were taught to believe in is actually not the America that is.”

What it means to be anti-racist

Ibram X. Kendi’s 2019 book How to Be an Antiracist draws a distinct line between non-racist and anti-racist, pointing out that the latter, not the former, is the true antonym of racist. Project READY, an online curriculum that focuses on race and equity, describes anti-racist in travel terms, but we’d like to tweak the metaphor. Picture yourself on a moving walkway in an airport. Instead of taking you to the flight gate, though, it’s headed on a long journey toward racial equality and justice. Someone who is merely not racist might do what most travellers do and stand still while letting the walkway do all the work. If the system breaks down, they passively stop and wait for it to start up again. The anti-racist, on the other hand, is always walking, deliberately and purposefully, toward the final destination. They may even step off the walkway if it gets too crowded or if it’s moving too slowly, in order to run beside it. They don’t depend on some unseen electrical force, and they won’t let heavy baggage weigh them down. That tenacity reflects anti-racist determination.

Says Powell: “It’s easy to come around people of colour and say you’re anti-racist, but the real work is to actually do it inside of your community that is white, that has benefited from white supremacy, from racism, from white-skin privilege.”

The difference between being an anti-racist and being an ally

Project READY makes a pretty clear distinction between being an ally and being anti-racist. Allies listen to minorities when they talk about racism without interrupting and getting defensive. They live in diverse neighbourhoods and think about the ways in which they might perpetuate systems of white privilege and white supremacy. Anti-racists are less thought/talk and more action. They actively work to upset the racial status quo. For Powell, though, semantics are less important than effort. “I’ve been an activist for a long time, and I’ve seen all kinds of words come and go,” he says. “But at the end of the day, are you willing to do the work in communities that need to be changed because of their destructive behavior?” If so, you can begin in a number of ways.

Befriend people of different races and ethnic backgrounds. Listen to their stories. Empathize. Try to feel their pain. Imagine walking in their shoes. Take that knowledge and spread it among your peers.

It’s nice to put a Black Lives Matter banner in your window, but the anti-racist is compelled to actually go out and do something. That might mean participating in a local demonstration or protest, mentoring young people in the BIPOC community, or supporting businesses run by people of colour. If your job requires you to hire, seek out diverse talent from minority groups as well as white candidates. Or, if possible, encourage your company to step up financially. White Minneapolis-based lawyer Steve Schleicher served as special assistant attorney general for the Derek Chauvin trial, and he worked the case pro bono. His efforts, of course, led to a conviction.

When you hear someone make a racist remark, don’t just roll your eyes and walk away. Tell them why what they’ve said is misguided and wrong. You don’t have to be aggressive or confrontational to be anti-racist. You can make your point in a calm, measured way that’s more likely to get a positive reaction. “Disruptive anger, where we’re just yelling and screaming at each other, leads nowhere,” Powell says. But silence can be deafening, tooขand deadly.

Open your eyes, ears, and mind

Seek out movies, music, art, and literature created by people from minority groups. Branch out from Shakespeare and Mark Twain and discover the brilliance of Black authors like Zora Neale Hurston, Langston Hughes, James Baldwin, and Toni Morrison. Acquaint yourself with the Black architects of rock and rollขRobert Johnson, Ma Rainey, Bessie Smith, Big Mama Thornton, Chuck Berry, Fats Domino, Little Richardขthe forerunners of Elvis, the Beatles, and the Rolling Stones. Or write your own book, like White Fragility author Robin DiAngelo. “It’s important because white folks oftentimes will only listen to white people about racism,” says Powell.

Become fluent in the history of BIPOC groups

Branch out from the whitewashed and white-centric version of North American history taught in school. Black teachers are essential to the learning experience, and a dearth of them can be intellectually and emotionally crippling for both Black and non-Black students. But, on your own, you can still dig deeper and go beyond Martin Luther King Jr. Learn about the Black leaders and thinkers that mainstream textbooks ignored for decadesขpeople like Harriet Tubman, Sojourner Truth, Frederick Douglass, Malcolm X, and Fred Hampton.

Saying nothing makes you an accessory to their bigotry or, at the very least, an enabler. Powell, like so many other Black people, has heard complaints from white friends with relatives whose views on race are stuck in the 1950s. “I ask these questions of my white friends: Have you done the serious work of challenging and confronting the racism of your family? Have you had these deep conversations with them? Have you done these deep dives? I’ve had examples where some of my white friends have said, ‘My father and my mother have evolved because of these conversations.'”

Don’t just hashtag; say something. It’s not enough to be angry in private or merely go through the performative motions. Do your research. Post statistics about structural racism. Share information and stories. Speak out against racial inequity until your friends beg you to start posting cat videos again.

How to learn more about being anti-racist

There are a number of books that can serve as guides for white allies who want to upgrade to anti-racist. Along with Ibram X. Kendi’s How to Be Antiracist and Robin DiAngelo’s White Fragility, Paul Kivel’s Uprooting Racism: How White People Can Work for Social Justice and Layla F. Saad’s Me and White Supremacy are excellent resources. Powell recommends Howard Zinn’s 1980 book A People’s History of the United States and Eyes on the Prize, a 14-hour documentary series that originally aired on PBS between 1987 and 1990. “[In Prize], you see young Black and white folks, civil rights workers, working together on the Freedom Rides,” says Powell, whose latest book is When We Free the World. “And A People’s History of the United States is an important book because Howard Zinn said in the introduction that he decided to write a book from the perspective of people who have been affected by oppression, not the perspective of the oppressors.”

The bottom line: You are what you eat, and what you read, watch, and listen to can be crucial to who you become. To that end, here are anti-racism resources, which can help change the way you think and live.