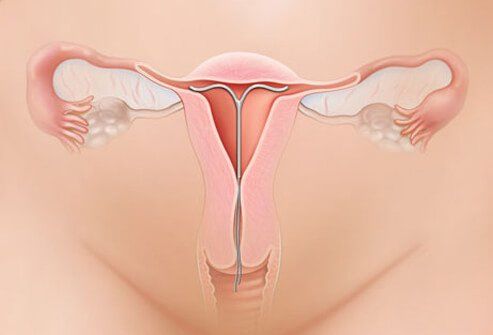 An IUD or intrauterine device, is a type of birth control. Side effects of IUDs depend on the type, but it may worsen menstrual cramps and pain.

Intrauterine devices (IUDs) are a form of birth control that prevents implantation of a fertilized egg in the uterus.
IUDs can contain hormones that help prevent the implantation process.
Other types of IUDs are copper-containing IUDs.
IUDs must be inserted by a health-care professional in the office.
Side effects of IUDs depend upon the type of IUD.
Copper-containing IUDs can increase menstrual bleeding.
Some IUDs can be left in place for up to 10 years.
IUDs can be removed at any time by a health-care professional.
IUDs do not provide protection against sexually transmitted diseases (STDs).

What is an IUD (intrauterine device)?

The intrauterine device (IUD) is a small T-shaped device that is used as a method of birth control designed for insertion into a woman's uterus. Having an IUD means that changes occur in the uterus that make it difficult for fertilization and implantation of an egg. IUDs also have been referred to as "intrauterine contraception" (IUC). Some IUDs approved for use in the United States contain medications that are released over time to facilitate the contraceptive effect. An IUD is a type of long-acting reversible contraception (LARC).

IUDs have been shown to be over 99% effective in preventing pregnancy. Although IUDs are highly effective, no birth control method, except abstinence, is considered to be 100% effective.

How does an IUD work?

It is not fully understood how IUDs work. They are thought to prevent conception by causing a brief localized inflammation that begins about 24 hours after insertion. The inflammatory reaction inside the uterus attracts white blood cells, which produce substances that are toxic or poisonous to sperm. The progesterone-releasing IUDs also cause a subtle change in the lining of the uterus that impairs the implantation of the egg in the uterine wall. This type of IUD also alters the cervical mucus, which, in turn, inhibits sperm from passing through the cervix.

What are the side effects of an IUD?

Side effects of the IUD are limited primarily to the uterus and depend upon the type of IUD that is inserted. The copper IUD may cause worsening of menstrual cramps and heavier menstrual bleeding, although hormonal IUDs usually reduce menstrual flow. Women with hormonal IUDs may have irregular periods and spotting, particularly in the first three to six months.

It is also possible for the IUD to pass through (perforate) the uterine wall and enter the abdominal cavity, where it must be retrieved surgically. Perforation of or trauma to the uterus by the IUD occurs in one to three per 1,000 insertions.

Does an IUD cause pain?

What are warning signs and symptoms of possible complications from an IUD?

Warning signs of possible complications from an IUD include

If a woman experiences any of these signs, she should contact a health-care professional.

What are the advantages of an IUD? How effective is an IUD?

The advantages of the IUD include the fact that it is highly effective in preventing conception, is reversible, and starts working almost immediately. Once the IUD is removed, there is a quick return to fertility. The Mirena

What are the types of IUDs (ParaGard, Mirena, Skyla)?

Intrauterine devices (IUDs) that are available in the U.S. come in two different types: 1) copper-releasing, or 2) progesterone-releasing.

TCu380A (ParaGard) is a copper-containing IUD: It releases copper from a copper wire that is wrapped around the base. The released copper contributes to an inflammatory reaction in the uterus that helps prevent fertilization of the egg. It is approved to remain in place for up to 10 years.

Levonorgestrel-releasing IUD (Mirena or Skyla): This form of IUD releases a progestin hormone from the vertical part of the T. Progestin acts to thicken cervical mucus, creating a barrier to sperm, as well as renders the lining of the uterus inhospitable to implantation of an egg. The two brand-named IUDs in this category contain different amounts of the hormone. Mirena is approved for up to five years of use and Skyla for up to three years.

Who can use an IUD?

Most healthy women are be able to use an IUD. They are not right for every woman, however, and some women should not use an IUD for contraception. Before an IUD is inserted, a woman will have a pregnancy test to ensure she is not pregnant and will be tested for sexually transmitted diseases (STD).

The following are reasons that a woman should not use an IUD:

Ongoing pelvic infection, such as an STD or a recent STD
Cancer of the uterus or cervix
Unexplained vaginal bleeding
Abnormal or distorted uterine anatomy

A woman who is allergic to copper or who has Wilson's disease should not use the copper-containing IUD.

How is an IUD inserted?

IUDs are only available by prescription and must be properly inserted by a health-care professional. A pelvic exam is required to insert an IUD, similar to the procedure for having a Pap test. The IUD is inserted into the uterus long as the woman is not pregnant.

The IUD is a small "T"-shaped device with a monofilament tail that is inserted into the uterus by a health-care practitioner in the office setting. When inserted into the uterus, the arms of the "T" are folded down, but they then open out to form the top of the "T." The device rests inside the uterus with the base of the T just above the cervix and the arms of the T extending horizontally across the uterus. A short piece of monofilament string attached to the IUD extends through the cervix into the vagina. This string makes it possible to be sure that the IUD is still in the uterus.

How soon does an IUD start working?

The IUD begins working to prevent pregnancy as soon as it is inserted, but full protection is believed to take about seven days in some cases, depending on when in the menstrual cycle it is inserted. If you have an IUD inserted within seven days of ending your menstrual period, it should be effective right away. At any other time in the menstrual cycle, you should use another method of birth control for the first week after insertion.

How long does an IUD last?

The copper-containing IUD can be left in place for up to 10 years, and the hormonal IUDs can remain for three or five years, depending upon the type of IUD.

How is an IUD removed?

An IUD must be removed by a health-care professional. It is very important that a woman not attempt to remove an IUD on her own, as serious problems may result. IUD removal is carried out by determining the position of the uterus, then locating and grasping the stings of the IUD with a special forceps or clamp. A health-care professional will then remove the IUD by gentle traction on the strings.

Occasionally, the strings of the IUD will not be located. In these situations, the strings have often slipped higher into the cervical canal. A health-care professional can use special instruments to locate the strings and/or remove the IUD. Complications of IUD removal are rare, and removal can take place at any time. Some studies have shown that removal is easier during the menstrual period, when a woman's cervix is typically softer than during other times in the menstrual cycle.

Will an IUD affect my periods?

The woman must check her IUD every month to be sure that it is still in place. The woman with an IUD in place will still have normal menstrual periods, although some women notice that flow is heavier. Other women, especially those with a hormone-releasing IUD, may have a lighter menstrual flow. Sometimes, the uterus expels (pushes out) the IUD. Expulsions may not cause any specific symptoms and can be overlooked. In addition to the woman checking the IUD, the device must also be checked periodically by a health-care professional.

Will my partner feel my IUD?

You and your partner should not be able to feel the IUD itself. However, you may feel the strings of the IUD at the upper end of the vagina.

What are the risks and complications of IUDs?

An IUD may not be appropriate for women who have heavy menstrual bleeding, had previous pelvic infections, have more than one sexual partner, or plan on getting pregnant. This is because IUDs do not protect against sexually transmitted infections (STDs) and should not be in place if a woman intends to become pregnant.

If women become pregnant with their IUDs in place, 50% of the pregnancies end in miscarriage. Any woman with an IUD who develops signs or symptoms of pregnancy, or has a positive pregnancy test, should see a health-care professional soon.

Women who use non-progesterone types of IUDs are less likely to have an ectopic pregnancy compared to women using no contraception. When a woman using an IUD does become pregnant, the pregnancy is more likely to be ectopic. Nevertheless, ectopic pregnancy in a user of an IUD is a rare occurrence.

Serious complications due to infection (pelvic inflammatory disease) associated with an IUD may prevent a woman from being able to become pregnant in the future.

Also, with the progesterone-releasing IUDs (levonorgestrel IUDs), a reduction in menstrual flow and a decrease in painful menstrual cramping are often observed with continued use. This is because the progesterone hormone can cause thinning of the lining of the uterus. These menstrual changes are not dangerous in any way and do not mean that the contraceptive action of the IUD is diminished.

Does an IUD protect a woman from sexually transmitted infections (STDs)?

No, the IUD does not provide protection against sexually transmitted diseases (STDs).