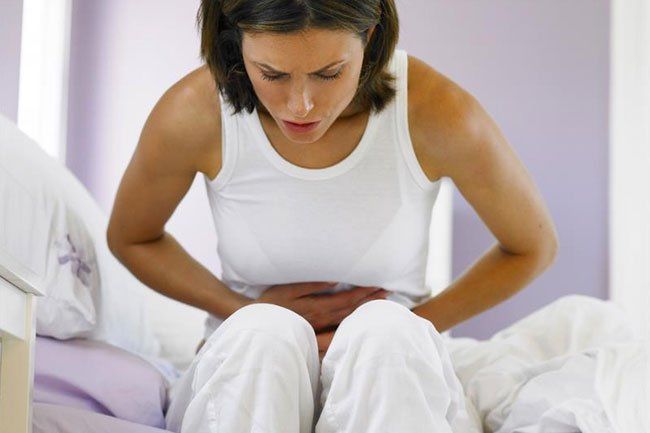 Concerned about food poisoning outbreaks? From ground beef to lettuce, many foods can cause them. Learn about foodborne diseases like Salmonella, E. coli, norovirus, Campylobacter, Staph, and hepatitis A. 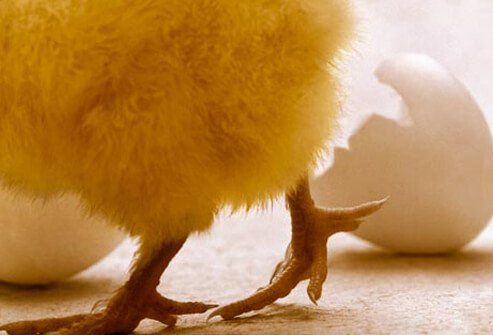 Salmonella food poisoning is common and unpleasant. Fever, stomach cramps and diarrhea that is sometimes bloody-these are all Salmonella food poisoning symptoms. Some people also have nausea, vomiting, or a headache. These symptoms can start as early as six hours after eating contaminated food and can last from four to seven days. Chicken and eggs often cause Salmonella outbreaks, and that can even be true of processed chicken such as chicken nuggets. Medical treatment for Salmonella poisoning is usually not necessary. For severe cases your doctor may prescribe antibiotics. 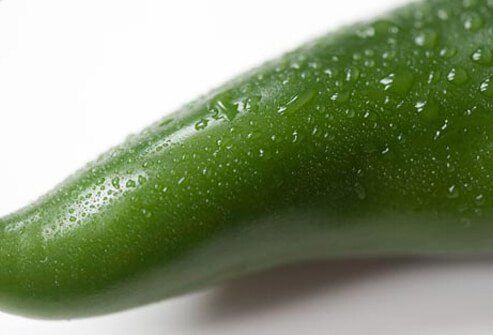 Many foods in the produce aisle can spread Salmonella. Recently reported outbreaks have involved peppers, tomatoes, leafy greens, and pre-cut melons. Sprouts are always at risk due to the warm, humid environments they are grown in, and because they are usually eaten raw. To protect yourself, always wash your produce thoroughly. Refrigerating your foods at or below 40 degrees can also keep you safe. 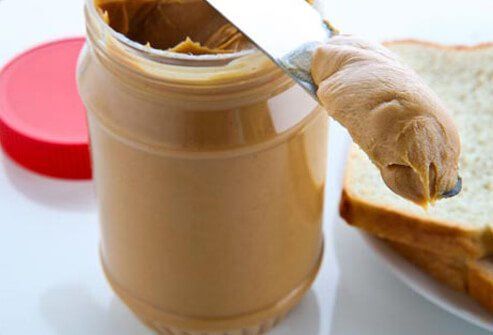 If you think food from a jar, box, or freezer is safe from Salmonella food poisoning, think again. A variety of processed foods have caused outbreaks, including nut butters, crackers, chips, and frozen meals. It's important to be aware of recalls. If you know a food product in your home has been recalled, return it to the store or destroy it right away. Never eat food that has been recalled. Remember that enough heat can destroy Salmonella, so bringing your processed foods up to an internal temperature of 165 F can also keep you safer. 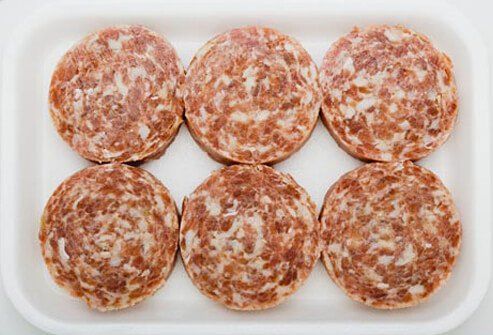 Ground beef is often implicated in Salmonella outbreaks, but any raw meat can be contaminated. Proper cooking safety is crucial to preventing this type of food poisoning. If you're preparing red meats like beef, pork, or lamb, always use clean surfaces, and disinfect cutting boards and kitchen counters afterwards with hot, soapy water. Cook using a meat thermometer and make sure the internal temperature of your food reaches at least 145 F. And if it is ground, the meat should be heated to at least 160 F. Poultry heat standards are higher still: Cook any chicken or turkey to at least 165 F. 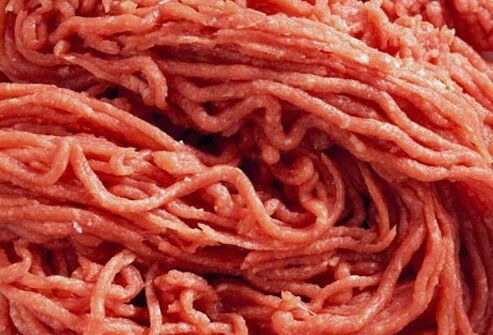 Another nasty, common food poisoning infection comes from E. coli. This is an extremely common type of bacteria that is usually harmless. But some strains can produce Shiga toxin, which can make people sick from eating it. Ground beef is a common source of E. coli outbreaks. Although some infections are extremely mild, others can be deadly. E. coli symptoms can be brutal, and often include bloody diarrhea and vomiting, along with severe stomach cramps. Symptoms usually begin three to four days after eating tainted food. After five to seven days you should be feeling better.

If your diarrhea begins to improve but you still feel very tired, your cheeks lose their pink color or you notice less frequent urination, you may have Hemolytic Uremic Syndrome (HUS). This serious condition can harm your kidneys and requires hospitalization, so go to the doctor immediately if you experience this sequence of symptoms. E. coli treatment requires lots of fluids, as one of the greatest dangers in this illness is dehydration. At the same time, you should avoid anti-diarrhea medicine because preventing diarrhea may keep the bacteria in your system longer. Talk to your doctor about balancing both needs. 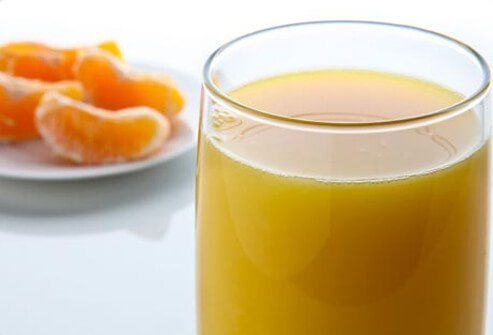 Raw juice hasn't been pasteurized, and neither has raw milk. Pasteurization is the process used to kill off harmful bacteria in these foods. No wonder these raw foods are more likely to cause E. coli food poisoning. Children are particularly at risk. Nearly 60% of raw milk outbreaks in the US involve a child under the age of 5, according to CDC data. If you make your own juice or cider at home, you can decontaminate it by heating your beverage to 160 degrees for at least one minute. 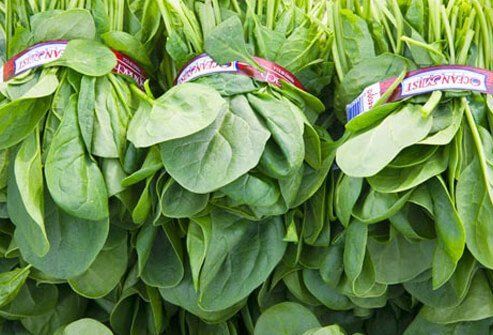 Although any fruit of vegetable can be tainted with E. coli, the riskiest are leafy green vegetables like spinach. A recent Romaine lettuce outbreak sickened at least 167 people across dozens of states, hospitalizing about half of these. Recalls can help protect you from this type of food poisoning. Also, carefully wash all fresh fruits and vegetables unless the packaging says "prewashed." 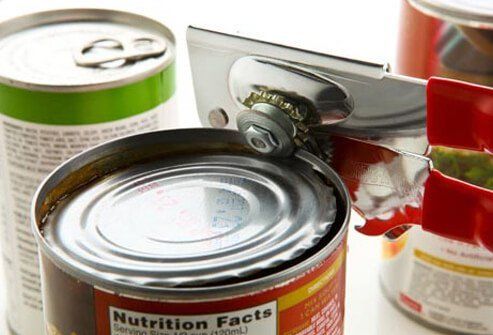 Botulism toxins come from bacteria that can grow in improperly canned foods. Just a small taste of food tainted with C. botulinum bacteria can be deadly. People who eat botulism-tainted food may suffer from a variety of nerve-related symptoms, such as double vision, poor reflexes, weakness and difficulty swallowing. If untreated, it can cause respiratory failure and death. Even with treatment, patients sometimes spend months on a breathing machine. If you can at home, do so carefully, following the government's detailed instructions throughout the process. 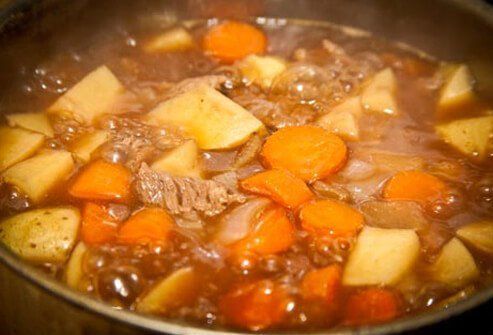 With about a million Americans poisoned each year, Clostridium perfringens is one of the most common types of food poisoning. Fortunately, the symptoms are relatively mild, with cramping and diarrhea that lasts less than 24 hours and no vomiting or fever. These bacteria can grow rapidly at fairly high temperatures. That's why food made in large batches and left to warm for hours-like cafeteria soups, stews, and gravies-are often responsible for infections. Food should be kept out of the bacterial "danger zone," meaning temperatures between 40 F and 140 F. If you’re refrigerating a large batch of food, like a big pot of soup for later, it is best to cool it in small batches. When you reheat food, bring it up to an internal temp of 165 F for at least 15 seconds. 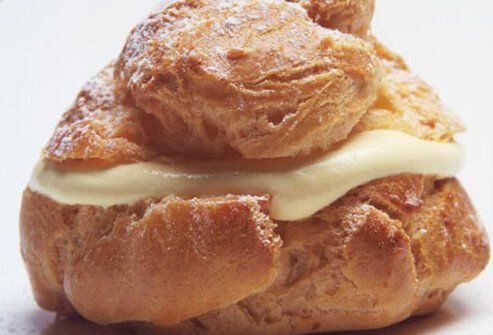 When you think of a staph infection, your first thought might be a scrape on your skin that becomes red, tender, and swollen. But Staphylococcus bacteria exist in about half of healthy people, so it can easily be spread to prepared food. Staph bacterial colonies grow quickly at warmer temperatures-between 50 F and 120 F. That's why foods must be kept hot enough or cold enough to stop bacterial growth. Foods commonly left for long periods at these temperatures include salads, pastries, and sandwiches.

What's more alarming-the toxins staph produces can withstand high heats, so you cannot cook them out. And dangerous toxin levels may produce no smell or other sign your food has gone bad. To avoid staph toxins, don’t leave food out that you plan to eat later. Get it in the fridge of freezer as soon as possible. 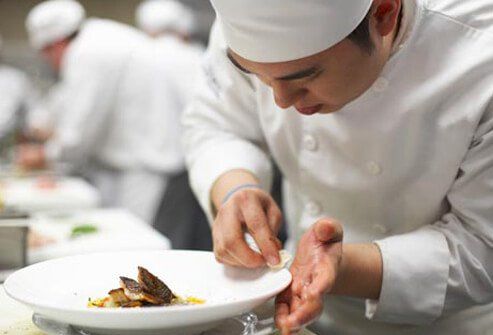 Hepatitis A is a viral infection that can leave you sick for months with symptoms like fever, nausea, vomiting, exhaustion, joint pain, jaundice (yellow skin), and clay-colored stool. Not everyone gets symptoms, but adults are more likely to get them than children. Infections come from feces, so food handlers who fail to wash their hands can cause hepatitis A outbreaks. The virus can also be spread through the water systems in some undeveloped parts of the world, though the US treats drinking water with chlorine to prevent this. There is no special treatment for hepatitis A, but vaccines are available. Fortunately, most people make a complete recovery and are afterwards immune for life, although rare cases of liver failure and death are possible. 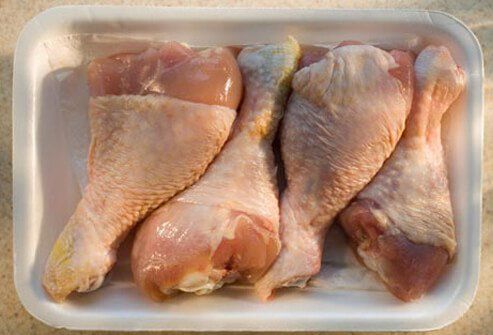 The most common source of bacterial food poisoning in America comes from Campylobacter. Most of the time, people get infected after eating undercooked chicken or turkey. All it takes is a single drop of raw chicken juice to become infected. One FDA study found that nearly half of raw chicken breast pieces contained the infectious bacteria. But outbreaks involving many people are usually connected to drinking contaminated water or raw milk. Symptoms of Campylobacter food poisoning include cramping, diarrhea, abdominal pain, and fever. These symptoms usually start two to five days after infection and last about a week. To prevent Campylobacter food poisoning, always wash hands before and after preparing food, especially raw poultry. Keep food preparation surfaces clean using soap and hot water, including cutting boards. Change hand towels used in the kitchen after each time you prepare raw poultry.