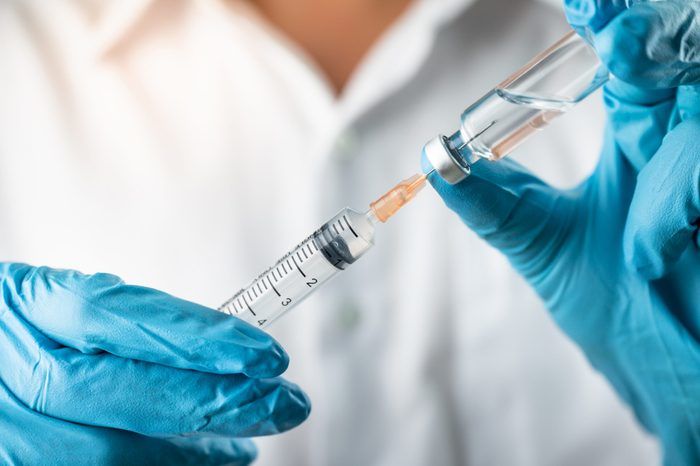 Do You Need to Get a COVID-19 Booster Shot?

Third shots of the vaccine are recommended for some people, but that's not the same as a COVID-19 booster shot, says Dr. Isaac Bogoch.

Reader’s Digest Canada: The National Advisory Committee on Immunization (NACI) is recommending some people get a third shot of a COVID-19 vaccine-but they also say it shouldn’t be called a booster. Can you explain why they’re encouraging a third shot, and how that’s different from a booster shot?

Infectious disease specialist Dr. Isaac Bogoch: The term booster shot implies that it’s an extra shot. But when we’re talking about people whose immune systems aren’t as robust as they once were-whether that’s due to an underlying medical condition or medications that they’re taking-it’s not really an additional shot. Those people actually need three shots. In other words, in those cases, the two shots should really be considered two-thirds of a three-dose series.

A booster vaccine, on the other hand, implies that you have completed your vaccine series-and now you’re getting an additional vaccine.

For the immunocompromised people, has two shots of the vaccine been a lot less effective than it is for everyone else?

It’s hard to quantify, but there’s data from two different areas that drive this decision. In the laboratory, it’s clear that individuals who have compromised immune systems just don’t mount the same degree of an immune response to these vaccines, in contrast to people that are not immunocompromised. But also, when you look at people who end up hospitalized with COVID-19, it’s people with compromised immune systems that are more likely to be in that scenario.

Okay, but their chance of being hospitalized after getting two shots is still way lower than with no vaccine, right?

Absolutely, that’s an important point. They are indeed already getting significant protection from COVID-19 with two shots. But, in order to optimize their protection, a third dose would be very, very helpful.

Are there any more specifics about who fits within the immunocompromised group?

No, they’re not included, but that doesn’t mean the elderly don’t require a booster vaccine. NACI’s purpose wasn’t to define the entire population who needs a booster vaccine-it was just to define those who are immunocompromised, who would require a third shot. And in fact, many provinces in Canada are giving booster vaccines to frail, elderly individuals who live in long-term care or chronic care facilities. Over the next month or so we might see an expansion of that program.

Okay, so let’s talk booster shots for people who are not immunocompromised. We already take boosters for other vaccines, so the concept is familiar. In the case of the COVID-19 vaccine, is the reason for a booster shot that the original series of two shots is wearing off?

That’s a question that hasn’t yet been fully answered-and there’s been different data from different places.

One of the issues is what kind of immunity you’re talking about. If it’s immunity to getting infected, we know that these vaccines aren’t perfect. We know they aren’t a bulletproof vest. You can still get COVID-19 if you’re vaccinated. And we knew this before the Delta Variant even emerged. We saw this in the very first clinical trials.

That said, while they don’t eliminate the risk of getting the infection, the heavy lifting of the vaccines is to prevent you from getting very sick, needing hospitalization, going into an ICU and dying. And when you look across all age groups, the vaccines continue to hold up with around 90 per cent effectiveness. Even when we look at the oldest age groups-those over the age of 70-vaccinated individuals have a markedly reduced probability of getting severely ill or dying.

So does everybody need a third dose of a vaccine right now in September of 2021? The answer is no.

Could some people never need a booster shot?

Yes, that’s certainly a possibility. But it’s very hard to be overconfident about the need for a third dose, based on all the data that we have now, especially for younger cohorts. We might need one. We might not need one. When we look at the age group of 12 to 30 who have two doses, for example, the risk of severe COVID-19 in that age group, after receiving two doses of a vaccine, is about zero per cent.

Speaking of younger people, clinical data for the 5-12 age group is supposed to be released soon. Do you think vaccine shots for those children will be available soon?

It’s hard to know. After clinical trials finish up, the ball will be in the regulatory agencies’ court. And it’s hard to predict how long that process is going to take. The key thing here is we shouldn’t take shortcuts. We can’t artificially speed up science. We have to take the time to do the right clinical trials, and to have the regulatory agencies pore over them to make a meaningful decision. This should not be rushed. We have to have a good understanding of their safety and of the immune reactions and immune responses.

In the meantime, how dangerous is COVID-19 right now for kids?

When you compare younger age groups to older age groups, kids just don’t get as sick. They certainly can get sick, and they can require hospitalization and intensive care, but it’s much less common compared to adults.

That said, you cannot let this virus run amok in any population, including the pediatric population. When we look at some of the southern states in the United States, we see pediatric hospitals that are overwhelmed, bursting at the seams because there are so many kids that require hospitalizations. It’s still fair to say that serious outcomes, like the need for hospitalization, is very rare in children, but a small percentage of a very large number ends up being a lot of kids that are sick in hospital. So, multiple things can be true and I think we have to take that into account. We should take steps to protect kids, and keep this virus at bay, especially in school environments.

And what about vaccine passports, which are now rolling out in some places in Canada-how effective will they be in keeping COVID-19 at bay?

I think we have to remember what the goal of the vaccine passport is. The vaccine passport is not going to end a fourth wave, that’s not what they do. They are going to help create a safer indoor environment. That’s all. If you ensure that everyone who is in a restaurant or bar is vaccinated, you have added a significant layer of protection and safety to that indoor environment. Again, people who are vaccinated can still get and transmit COVID-19, but it’s just less likely-and so vaccine passports lower the risk of introducing or transmitting COVID-19 in that space.

Of course, we can still have other measures in place to keep the virus at bay, like masking, good ventilation and crowd control in those indoor environments to create additional layers of safety and protection. But, essentially, the vaccine passports mean that we can start to do things that we weren’t doing during waves one through three-like going to restaurants, going to movies, going for a drink with your friends at a pub. They can be a tool to help prevent shutdown of non-essential businesses, especially during a rise in COVID-19 cases.

How long will vaccine passports be needed? And how long do you think this fourth wave will last?

Vaccine passports have to be a time-limited initiative with clear metrics for when their use will stop. When we look at where we’re at right now, I would imagine that they might be something we’ll see through this fall and winter.

Pandemics have a beginning, a middle, and an end. My guess is that we’re in the late middle of the pandemic. It’s not over, but we’re closer to the end given that we have widely available vaccines. We have millions of Canadians who are eligible but not yet vaccinated, a very transmissible Delta variant, and now innumerable opportunities for the virus to be transmitted given that people are congregating indoors in colder weather. We are going to see higher case numbers than we did throughout the summer, but if enough people are vaccinated, maybe we can work our way out of it by the tail end of the winter and the spring of next year. That, along with some people who get infected and have immunity related to recovery from natural infection, may help us reach a critical threshold where the virus is still around, but it’s not going to disrupt our society as significantly as it is now.