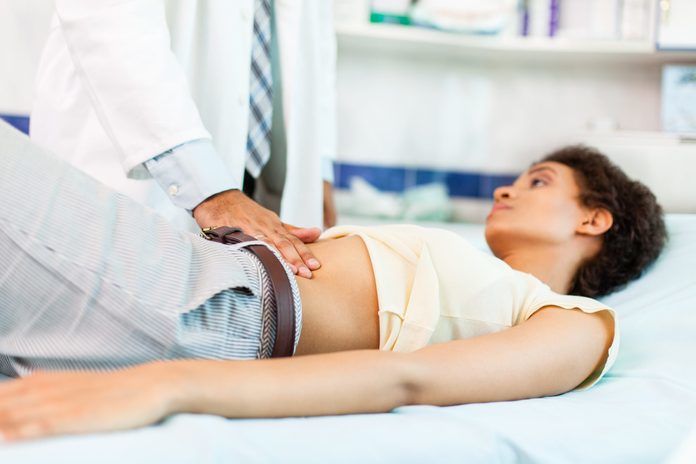 5 Signs of Colon Cancer Every Woman Should Know

Colon cancer symptoms in women are similar to those in men, but they can be confused with gynecological issues, like cramping and bloating.

If you hear the word “colon cancer,” you might picture a patient who is an older male, but that’s far from the reality. “Colorectal cancer is the third most common cancer among men and women,” says Milena Gould Suarez, MD, a gastroenterologist and associate professor at Baylor College of Medicine in Houston. In fact, the risk is nearly identical for each gender. According to the Canadian Cancer Society, 1 in 14 men will develop colon cancer in their lives compared to 1 in 18 women.

It’s clear: Colon cancer is a woman’s disease, too. Colon cancer shows up in women just about the same way it does for men, but there are some nuances. For example, some of the symptoms may be confused with gynecological symptoms, such as bloating or cramping. Another group affected by colon cancer: millennials. Colon cancer rates are rising among millennials (people born between 1981 and 1996), making them twice as likely to develop the disease as those born in 1950.

Colorectal cancer refers to any cancer that starts in the colon or rectum, which together make up the large intestine in your gastrointestinal tract. Polyps, or growths, can form in the colon or rectum. Most are benign, but certain types have a higher risk of becoming cancerous, including adenomatous polyps, sessile serrated polyps, and traditional serrated adenomas. Hyperplastic polyps and inflammatory polyps usually do not develop into cancer.

What are the risk factors for colon cancer?

A parent, sibling, or child diagnosed with colon cancer, or a relative diagnosed under age 50
A family history of an inherited genetic syndrome, such as Lynch syndrome
Personal or family history of certain polyps
Inflammatory bowel disease, such as Crohn’s disease and ulcerative colitis
A diagnosis of ovarian, breast, or endometrial cancer
A sedentary lifestyle
Being overweight or obese
Eating red and processed meats
A diet low in fruits and vegetables
Smoking and drinking alcohol

Look out for these symptoms of colon cancer in women. Keep in mind that colorectal cancer may cause no symptoms at all, especially in the early stages.

Anemia is when you have a low red blood cell count. In colon cancer, it can mean that there is internal bleeding. It’s often one of the initial signs of colorectal cancer.

You can imagine the extra layer of complexity if you are a woman. “Some female patients are told that their anemia is related to their menstrual period and that they shouldn’t worry about it,” says Dr. Suarez. That can lead to a delay in diagnosis.

If you are a woman with anemia and treatment with iron supplements does not address the issue, ask your doctor about colorectal cancer screening. There are several tests for colorectal cancer, including colonoscopy. During a colonoscopy, a doctor examines the entire colon with an endoscope, a thin, flexible instrument with a light and camera, for signs of cancer.

The first thing people think of when they notice blood in the toilet bowl or on toilet paper post-wiping is hemorrhoids, which are bulging, swollen veins in your rectum that can itch and bleed. “Rectal bleeding is not normal,” says Dr. Suarez. “It can definitely be hemorrhoids, but the only way to know for sure is by an exam.”

You will need a rectal exam in order to diagnose hemorrhoids. Remember it’s possible to have both hemorrhoids and colon cancer. If your hemorrhoids don’t get better with treatment, talk to your doctor about a colonoscopy, says Benjamin Schlechter, MD, a medical oncologist who specializes in gastrointestinal cancers at Dana-Farber Cancer Institute in Boston. And if your bleeding doesn’t occur with hemorrhoids and if you’re eligible or due for a colonoscopy, schedule one.

The body loves routine. “You should have the same bowel movement at 20 as you do at 70. Once you’re set in your patterns, it really shouldn’t change. If you notice something different, see your doctor,” Dr. Schlechter says. Changes include a switch to diarrhea, constipation that lingers, or going from having a bowel movement once a day to four times a day.

Also look out for pencil- or pen-like stools. This can be indicative of a tumor that’s squeezing or partially blocking the colon, causing stool to come out thinner than normal.

Don’t just brush this off. “I think that when women have belly complaints sometimes it’s assumed that it’s a gynecological issue rather than a gastrointestinal problem,” says Dr. Schlechter. Alternate explanations given may be menstrual cramps or even endometriosis.

If you’re experiencing abdominal pain that you know is not related to your cycle, or if the pain is new, see your doctor for an exam and possibly a colonoscopy.

While it’s easy to brush off fatigue as lack of sleep and weight loss as due to stress, you should discuss these changes with your doctor.

Talk to your doctor about what timing is right for you and whether risk factors make you a candidate for early screening. If polyps are found, they can be removed before they have a chance to become cancerous.

How is colon cancer diagnosed?

Even if you don’t have symptoms, you should get the recommended screening tests to look for cancer. Those include:

Stool tests: This includes the fecal immunochemical test (FIT). Stool tests use a chemical or antibodies to detect blood or altered DNA in stool. Depending on the test, you will get this done every one to three years.

Flexible sigmoidoscopy: A short, thin lighted tube is inserted into your rectum to look for polyps or cancer in the rectum or lower third of the colon. You will get this done every five years.

Colonoscopy: People with average risk get this done every 10 years starting at age 45 or 50.

CT colonography (virtual colonoscopy): X-rays and computers produce images of the colon for the doctor to look at.

If you have signs or symptoms of colorectal cancer or need follow-up testing for an abnormal finding, then you will need further tests to determine what is going on. Your physician may recommend:

Barium enema: An enema tip is inserted into the rectum to administer liquid barium, allowing for imaging of the colon.

Imaging tests, such as CT scan, ultrasound, or PET scans: After a colon cancer diagnosis, these scans may be used to see if the cancer has spread and to determine the stage of the cancer.

How is colon cancer treated?

It’s important to be aware of four types of colon cancer. They include:

Adenocarcinoma: Most colon cancer is an adenocarcinoma, which affects the cells that line the inside surface of the colon.

Carcinoid tumors: These tumors start in hormone-producing cells in the intestines. They are considered neuroendocrine tumors and are diagnosed in as many as 12,000 people in the United States each year.

Gastrointestinal stromal tumors: This is a rare cancer that starts in the body’s soft tissues, blood vessels, or connective tissues in the colon.

Lymphoma: Cancer that starts in white blood cells. Usually, this is in lymph nodes, but it can also begin in the colon.
Risk factors for colon cancer in women

Colon cancer is extremely treatable if caught early. Surgery is often the first choice of treatment to remove the tumor. However, depending on the stage of colon cancer, your doctor may recommend other therapies in addition to surgery.

Here are some of the most common colon cancer treatments:

Surgery: Surgery will remove the cancer and is the most common treatment for colon cancer among all stages, says the National Cancer Institute. During surgery, lymph nodes may also be removed to check for cancer.

Chemotherapy: Chemotherapy drugs are designed to kill cancer cells and/or stop their growth. Systemic chemotherapy can be administered in an oral pill or via injection. Regional chemotherapy is when drugs are given directly into the abdomen

Biologic therapy: Immunotherapy is a biological therapy that harnesses your own immune system to fight off cancer.

When it’s caught at the regional stage, meaning it’s spread to nearby structures or lymph nodes, both colon and rectal cancer have a five-year survival rate of 72 percent. If found when the cancer has spread to distant organs, such as the liver or lungs or distant lymph nodes, the five-year survival rate is 14 percent for colon cancer and 16 percent for rectal cancer.