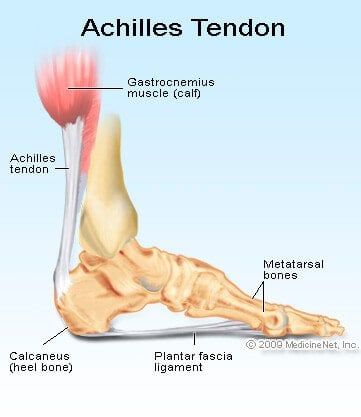 The Achilles tendon is the largest and strongest tendon in the human body. Read about symptoms, testing, treatment, and recovery from a ruptured Achilles tendon.

Facts you should know about an Achilles tendon rupture

The Achilles tendon forms from two muscles in the back of the calk, the gastrocnemius and the soleus, about 15 cm to 6 inches above the ankle joint and spirals as it crosses the ankle joint to attach to the heel bone (calcaneus). A sheath surrounds the tendon, allowing it to glide easily as the ankle moves through its range of motion.

Since the calf muscles originate above the knee and the Achilles attaches below the ankle, the function of the muscle-tendon unit is critical for walking and running. When the calf muscles contract, it causes the ankle to point the foot downward and the foot to turn inward and up). (See picture 1.)

The tendon needs to be strong. Running and climbing stairs generates force inside the tendon equal to 10 times the body's weight.

What is an Achilles tendon rupture? 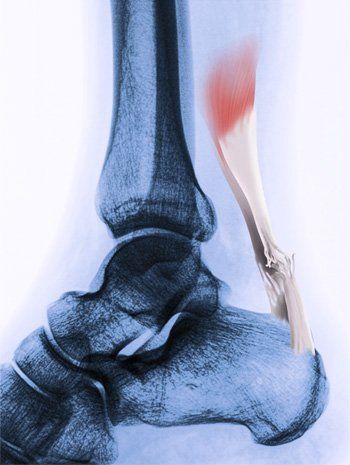 Rupture of the Achilles tendon is not uncommon in healthy, active individuals. The rupture is typically spontaneous and most commonly observed in individuals between 24-45 years of age. The majority have had no prior history of pain or previous injury to the tendon. In the majority of cases, rupture of the Achilles tendon occurs 2-6 cm above the insertion of the tendon into the heel bone.

Risk factors for Achilles rupture include poor conditioning, corticosteroid medications (either taken by mouth or injected near the tendon), fluoroquinolone antibiotics (ciprofloxacin, levofloxacin), and overuse. A previous ruptured Achilles tendon increases the risk for another, both on the side that was initially hurt, and on the other unaffected side.

Most commonly, the Achilles ruptures when there is a sudden, forceful movement of the foot downward against resistance, such as when an individual pushes off the foot with great force to jump. This often occurs in sports like basketball, tennis, or football.

The symptoms of a rupture include acute sharp pain in the back of the heel and inability to plantarflex the foot. The victim may remember hearing a snap when the injury occurred. Because there is an imbalance between the muscles that push the toes down and those that pull them up, walking becomes difficult with the pain and because the foot will drag.

Sometimes the tendon does not fully rupture but only partially tears. The symptoms are the same as a complete tear, and a partial tear can progress to a complete rupture. While the Achilles tendon rupture usually occurs near the insertion in the heel, it can occur at any location along the course of the tendon (see picture 2).

There are other causes of pain at the back of the heel than Achilles tendon rupture. It may be due to retrocalcaneal bursitis where inflammation occurs within the sac that cushions the tendon as it passes the bony edge of the heel bone. Paratenonitis is inflammation of the tendon sheath that surrounds the length of the tendon. The treatment for bursitis and stenosis incorporates rest, exercise, and occasionally physical therapy.

About 1 million athletes a year develop Achilles tendon inflammation or rupture. Achilles tendon rupture tends to occur in athletic people between ages 30 and 50 and mostly in men (6:1 men: women). There may be an anatomy reason for the predominance of men. Achilles tendons in women have a smaller area and are thinner and may there may not be enough force generated to cause a rupture.